Shea butter is an emollient, meaning it is high in fatty acids.  It is a key ingredient in many beauty products, including shampoos, conditioners, skin creams, soaps and lotions. 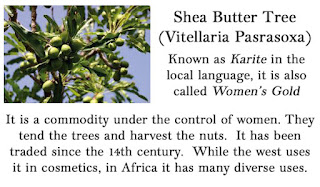 Shea butter comes from the shea tree (Sapotaceae Vitellaria pradoxa).  These trees are only found in the African Sahel, the semiarid region south of the Sahara Desert.  They live between 150 and 200 years.  It grows to a height of 15 to 25 meters.  The nut they produce is almost 50% fat.   These fatty acids include oleic acid, stearic acid, linoleic acid and palmitic acid. 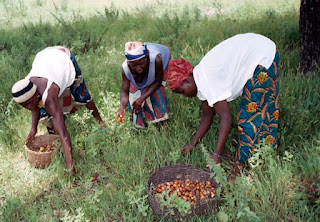 In African countries, shea butter is used as a waterproofing wax, making candles, to increase the durability of wooden musical instruments, as an ointment for pain relief and as a cooking oil.  In the United Kingdom it is incorporated into many tissue products like toilet paper.

Shea butter in beauty products is generally used in small amounts due to its high cost compared with other oils such as palm oil or olive oil.