Yes. Smoking can speed up the normal aging process of your skin, contributing to wrinkles. These skin changes may occur after only 10 years of smoking. The more cigarettes you smoke and the longer you smoke, the more skin wrinkling you're likely to have — even though the early skin damage from smoking may be hard for you to see initially. Aside from age, smoking is the strongest predictor of facial wrinkling in men and women.  And smoking doesn't cause wrinkles only on your face. Smoking is also associated with increased wrinkling and skin damage on other parts of your body, including your inner arms. 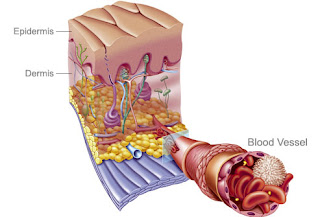 How does smoking lead to wrinkles? The nicotine in cigarettes causes narrowing of the blood vessels in the outermost layers of your skin. This impairs blood flow to your skin. With less blood flow, your skin doesn't get as much oxygen and important nutrients, such as vitamin A.

Many of the more than 4,000 chemicals in tobacco smoke also damage collagen and elastin, which are fibers that give your skin its strength and elasticity. As a result, skin begins to sag and wrinkle prematurely because of smoking.

In addition, repeated exposure to the heat from burning cigarettes and the facial expressions you make when smoking — such as pursing your lips when inhaling and squinting your eyes to keep out smoke — may contribute to wrinkles. Premature wrinkling was first documented in smokers in the early 1970s, in the Annals of Internal Medicine. In a study of more than 1,100 subjects, University of California researcher Harry W. Daniell noted that the severity of wrinkling—after accounting for factors like age and sun exposure—was most apparent in smokers of both sexes beginning around the age of 30. Smokers between the ages of 40 and 49, reported Daniell, were as likely to be “prominently” wrinkled as non-smokers who were 20 years older.

In the picture above you can clearly see the effect smoking had on Twin B.
Posted by Beauty Care Choices at September 11, 2019
Email ThisBlogThis!Share to TwitterShare to FacebookShare to Pinterest
Labels: beauty science