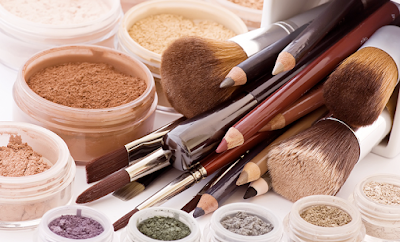 If it shimmers, it's likely to contain mica. Everything from cosmetics to car paint to asphalt roof shingles contain mica.

The word mica, from the Latin micare—to shine, flash, or glitter—actually refers to a group of 37 crystalline silicate minerals found in different types of rock. Mica often occurs as flakes, scraps, or sheets, and has been used by humans since prehistoric times.


Because Mica comes from the earth it may contain trace amounts of heavy metals. The levels of heavy metals in Mica are regulated by the FDA, and the small amounts that may eventually be in cosmetic or personal care products do not pose a risk to human health. 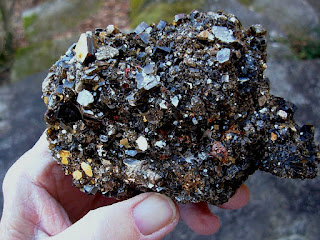 Mica is one of the most important mineral ingredients in cosmetics, used widely to add shimmer and sparkle. Micas use light reflection, refraction, and transmission to exhibit their effects much like a prism creates various colors as light passes through it. Wet-ground mica, which retains the brilliance, is used . in the cosmetics industry. Its reflective and refractive properties make mica an important ingredient in blushes, eye liner, eye shadow, foundation, hair and body glitter, lipstick, lip gloss, mascara, moisturizing lotions, and nail polish. Some brands of toothpaste include powdered white mica. This acts as a mild abrasive to aid polishing of the tooth surface, and also adds a cosmetically pleasing, glittery shimmer to the paste.

Until the 19th century, large crystals of mica were quite rare and expensive as a result of the limited supply in Europe. However, their price dramatically dropped when large reserves were found and mined in Africa and South America during the early 19th century. The largest documented single crystal of mica was found in Lacey Mine, Ontario, Canada

The British Geological Survey reported that as of 2005, Koderma district in Jharkhand state in India had the largest deposits of mica in the world. China was the top producer of mica with almost a third of the global share, closely followed by the US, South Korea and Canada.

The down side of MICA
According to a March 2018 report from the Switzerland-based nongovernmental organization Terre des Hommes (TDH), an estimated 22,000 children work in mica mines in India, where about a quarter of the world's supply is extracted.

Claire van Bekkum, who heads the mica team for TDH, which produced those television spots, has visited the Indian states of Bihar and Jharkhand, the country's so-called mica belt. "You arrive in some remote villages and everything is sparkling—the ground, the hair of the children," she says. She's watched kids flee into the forest, leaving small tools scattered on the ground next to baskets of flaked shards. While Indian law prohibits children under 18 from working in hazardous industries, 70 percent of India's mica mines are operated illegally, by a mafia of sorts whose members have no qualms about using child labor—and don't take kindly to inquisitive outsiders.  Interviews with workers and local communities discovered children were not only risking their health by working in abandoned "ghost" mines off official radars, but they were dying in the unregulated, crumbling mines, with 20 documented mica-related deaths in a single month.

Though it uses only 18 percent of the mica mined globally each year, the beauty industry is leading the charge to clean things up.

Many companies have begun replacing the natural mica in its products with a lab-made version called synthetic fluorphlogopite. The ingredient, created by extracting silicate crystals from other minerals processed at high temperatures, exhibit a superior lustrous sparkling effect and high color purity.
Super smooth with pleasant slip and excellent payoff, they provide high compressibility and superior binding performance.  Synthetic Micas comply with global cosmetic regulations and are also extremely popular for industrial applications such as auto paint and nail lacquers.

What can you do?
Contact your product manufacturer and request that they disclose the source of their mica.
Posted by Beauty Care Choices at August 14, 2019
Email ThisBlogThis!Share to TwitterShare to FacebookShare to Pinterest
Labels: beauty science