Each curl has its own internal structure, which controls the shape and flow of your hair. Ouidad identified the four different curl types — Loose, Classic, Tight, and Kinky — and developed a signature line of products that complement each type. Because every curl needs the regimen that treats it right.

The Ouidad philosophy knows your hair inside and out, ensuring that your hair — with its unique curl pattern and distinctive style — stays hydrated, healthy, and happy.

Their formulas use the most sophisticated ingredients and combine decades of experience with the latest in scientific breakthroughs.  They use only the deepest moisturizers and most nourishing botanicals to strengthen every strand from the inside out. Over time, you’ll see that your curly hair doesn’t just look better — it will also be softer, stronger, and healthier. 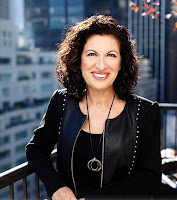 OUIDAD - the founder of OUIDAD
Birth country: Lebanon
Arrived in the U.S.: 1969

HER STORY
My dad was extremely successful importing and exporting crops between the borders of Syria, Lebanon, and Israel. But he was picked up several times by the Palestinians during the war, so for him, it was really about taking his family to America to protect us so we could have a better life. We came to the U.S. on an ocean liner when I was 15. We went to live in Lincoln, Rhode Island in a Lebanese and Syrian community. They put my older sister and me in eighth grade because we spoke no English whatsoever—we learned it in school and watching The Mary Tyler Moore Show.

Right after I graduated high school and finished my certification for hairdressing, I was working on the east side of Providence, barely speaking English, getting by. And I met a stylist who was doing Broadway hair and makeup—he liked my work with curly hair and we joined forces. That’s how I ended up in New York, London, and Paris and then back to New York doing Evita. That team asked me to sign a five-year contract, and I refused so I was let go.

My husband was in restaurants, and we were both ambitious. We wanted to open a business, so we flipped a coin: heads would be a salon, tails would be a restaurant. It was heads, and we opened Ouidad on April 23, 1983. We were the first salon in the country catering only to curly hair. And there were no products of course, so I would combine all kinds of different things. I started taking night courses in chemistry and got involved with two labs, but I used to make the deep treatment in my color sink long before I opened Ouidad. We launched the first cleanser, the VitaCurl Clear and Gentle Shampoo. And we worked for four years to come up with our original Climate Control gel. We’d do half our clients’ heads with one product, the other half with another, and then we’d make them walk out in the rain and come back. And then everything just launched from there. It was a lot of work and lots of fun.

This is what’s great about this country. I have people on my team who have been with me for 20 years. They started right out of high school, got married, had kids, bought homes. Their kids are going to college. They’re Romanian, Hungarian, Colombian, Trinidadian. Mirsada, who works with my team at the flagship salon in New York City, was shot at while fleeing Kosovo.