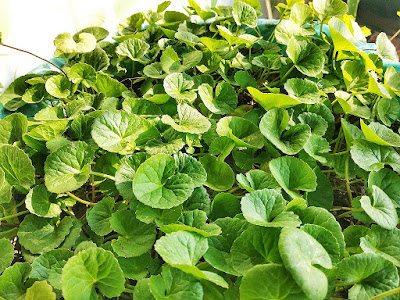 Centella asiatica, also known as Gotu Kola and Indian Pennywort, is a herb that’s been used in cooking and traditional medicine in Asia for hundreds of years. It contains chemicals called terpenoids that have beneficial properties for skin. Some of the active terpenoids include asiatic acid, madecassic acid, asiaticoside and madecassoside. They all have similar properties: they’re wound healing, anti-wrinkle, anti-pigmentation, anti-irritant and antioxidant.

Terpenoids make up around 8% of the weight of the plant. The main four that have been studied for their skincare benefits are asiatic acid, madecassic acid, asiaticoside and madecassoside. They’re sometimes included in a product alone in pure form, or in combination as “Centella asiatica extract” The terpenoids (TTF) cause a significant increase in the percentage of collagen and cell layer fibronectin. The most beneficial effects are the stimulation of scar maturation by the production of type I collagen, decrease in the inflammatory reaction and myofibroblast production.

What Can Centella Asiatica Do for Skin?