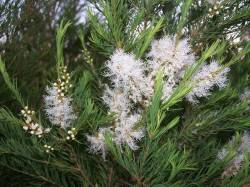 Melaleuca is a member of the myrtle family of plants. There are well over 200 species, most of which are endemic to Australia. Depending on the species, they grow as shrubs or trees from between 2 and 80 feet tall. The leaves are evergreen. The bark is often flaky and exfoliate (hence the name ‘paper-bark’ for some species of Melaleuca). The flowers, which vary from white thorough yellow or even greenish to pink and red, are produced in dense clusters along the stem with fine, small petals and a tight bundle of stamens which mature to produce a small woody cup-shaped capsule, 2 – 3 mm in diameter, which is packed with tiny seeds (up to 60 000 per gram). Tea trees are named either from the brown coloration of many watercourses caused by the leaching of tannins from the leaves of this and similar species, or alternatively it has been said that Captain James Cook named the tea tree because he observed the indigenous Bundjalung people of eastern Australia use the leaves to prepare a healing tea.

Tea tree oil is available as an oil and in many over-the-counter skin products, including soaps and lotions. However, tea tree oil should not be taken orally. If swallowed, it can cause serious symptoms.

How does it work?
The chemicals in tea tree oil may kill bacteria and fungus, and reduce allergic skin reactions.

Results might vary because there are no standardized methods for harvesting tea tree oil or creating products containing the oil, however, current research on tea tree oil use for specific conditions shows:
Most people can use tea tree oil topically with no problems. However, tea tree oil can cause:
Don't use tea tree oil if you have eczema.  Tea tree oil is toxic when swallowed. Serious side effects can occur, including:

Posted by Beauty Care Choices at May 08, 2019
Email ThisBlogThis!Share to TwitterShare to FacebookShare to Pinterest
Labels: beauty science