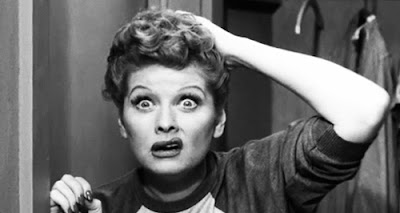 Graying hair is one of the most common and inevitable signs of aging we experience—yet it’s also one of the most mysterious. We all know someone who started graying in her early 20s while others don’t go gray until their 60s or later. We've also shuddered at our first grey hair. So, why does hair turn gray — or even white sometimes? And why does it happen for some people sooner than others?

Well, to start, stress isn’t a factor. I know—mind blown. According to WebMD, various studies have found that, contrary to popular belief, extreme stress won’t cause your hair to go gray prematurely.
In fact, hair doesn’t actually “turn” gray. Once a hair follicle produces hair, the color is set. If a single strand of hair starts out brown (or red or black or blond), it is never going to turn gray. Your hair follicles just produce less color (melanin) as they age, so when hair goes through its natural cycle of dying and being regenerated, it’s more likely to grow in as gray beginning after age 35. Genetics can play a role in when this starts.

While being under stress can’t turn your hair gray, stress can trigger a common condition called telogen effluvium, which causes hair to shed at about three times faster than normal. The hair grows back, so the condition doesn’t cause balding. But if you’re middle-aged and your hair is falling out and regenerating more quickly because of stress, it’s possible that the hair that grows in will be gray instead of its original color.

And though there’s not much definitive proof of what does cause hair to turn gray, there are a few commonly believed reasons.

Melanin Production: The pigment in hair is called melanin, and it’s produced by cells in the hair bulb. As we age, the cells stop producing that pigment, causing our hair to grown in gray (with minimal melanin) and white (with no melanin).

Genetics: Many studies have shown that the time and extent of melanin decrease in hair is linked to genetics, and people are predisposed to go gray at or around a certain age. Also, in general, Caucasians start graying in their mid-30s, Asians in their late 30s, and African-Americans and Africans in their mid-40s.  Graying is considered to be premature if it happens before age 20 in white people, 25 in Asian people, and 30 in African people.

Hydrogen Peroxide Build-Up: No, we’re not referring to the hydrogen peroxide that comes in a bottle: Hair cells actually make small amounts of hydrogen peroxide themselves. But over time, those amounts build up and  that may result in the growth of gray hair. Hydrogen peroxide buildup blocks the normal synthesis of melanin, thereby essentially bleaching your hair from the start. Another factor in this process is catalase, an enzyme produced by our bodies that breaks down hydrogen peroxide. But, with time, we produce less of the enzyme, which means there’s less of it to break down the hydrogen peroxide.

Environmental Factors: Many studies have also found a link between various environmental factors and graying hair. Things like ultra-violet light exposure, nutritional deficiencies (primarily vitamin D3 and B vitamins), and even smoking can lead to premature loss of pigment in your hair. Yet another reason to quit smoking and eat your vitamins!
Posted by Beauty Care Choices at April 24, 2019
Email ThisBlogThis!Share to TwitterShare to FacebookShare to Pinterest
Labels: beauty science, Hair care