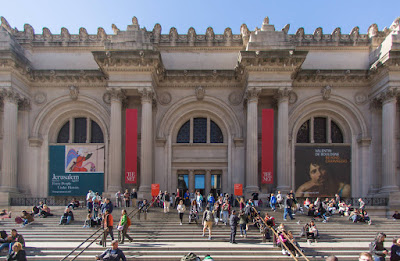 Stars and celebrities graced the stairs of New York City's Metropolitan Museum of Art on May 7, 2018 for the annual MET Gala, and it was gorgeous! This year's theme of Heavenly Bodies: Fashion and the Catholic Imagination was received with controversy; after the event though most of us are glad it was what it was. The costumes were elegant, daring and very original! Celebrities were adorned with ornate crosses, elaborate beadwork, and amazing headpieces. To match all these great looks also came some simply stunning manicures.

Zoya is one of our many celebrity favorite brands for its unique 10-free formulations. Which means no formaldehyde, formaldehyde resin, dibutyl phthalate, toluene, camphor, TPHP, parabens, xylene, ethyl tosylamide or lead. Phew... So, it was no surprise that we caught quite a few manicures from them. Below are three of our favorite costumed-up nails that matched the evening of sparkle heaven. 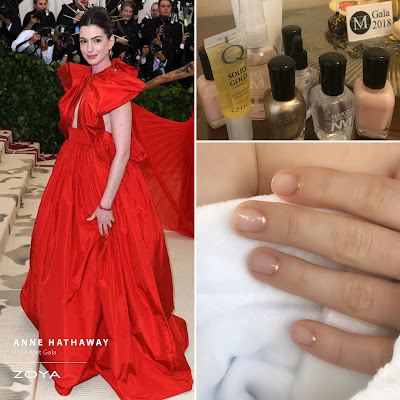 Anne's bold, red, Valentino Haute Couture dress was sensual and luxurious. Her sharp and graphic headpiece was anything but, while still giving her an angelic look. To tie the looks together was this simple and stunning Zoya manicure.  Manicurist Casey Herman started with a base of Naked Manicure Buff Perfector to dilute the natural whites and pinks under Hathaway's nail bed. She then applied two thin layers of Zoya Loretta for their light-catching effect. On top of that was a thin halo of Zoya Ziv to match her stark halo. Finally, everything was sealed in with Naked Manicure Glossy Seal. 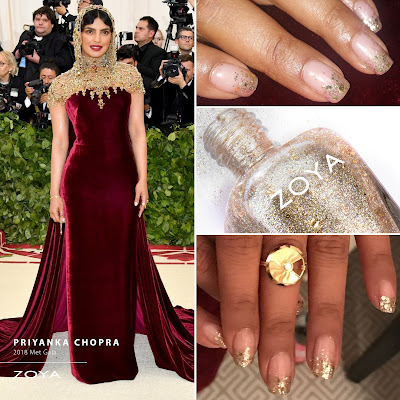 Priyanka walked the MET Gala's red carpet in a perfect 10 red velvet dress designed by Ralph Lauren. Her headpiece was a true to theme Catholic-inspired masterpiece. This best-dressed look was pulled together with a gorgeous manicure by Pattie Yankee. Her nails stayed true to her look by embodying the simpleness of her dress and the elegance of her headpiece. Pattie started this mani with Naked Manicure Naked Base to ensure there would be no chipping on Chopra's nails. She then added a thick layer of Naked Manicure Nude Perfector for a healthy glow. Next, she added Zoya Nahla to the tips for a little bit of drama and glamour. Finally, it was all sealed in with Naked Manicure Glossy Seal for a photo finish. Oh, and did we mention she had a pedicure that matched too! Wasn't seen on the red carpet, but still how fun is that! 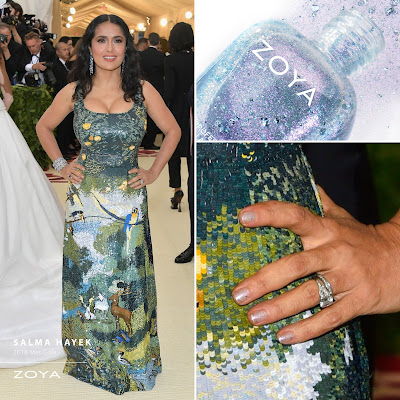 Salma looked like she should have been a display piece at the coveted fashion gallery. Joseph Altuzarra designed this one of a kind dress with both the gala's theme and Hayek herself in mind. The twist on the Garden of Eden may not have shone clear to the best-dressed lists but Salma still looked stunning. Her delicate manicure by Casey Herman were truly the clouds on top of the magnificent tapestry on her dress. Herman began by using a light layer of Naked Manicure Lavender Perfector to remove all reds and pinks from Hayek's nail bed. That made the best base to add two layers of Zoya Saldana. The effect was iridescent perfection that perfectly matched her sequined dress.
Posted by Beauty Care Choices at May 10, 2018
Email ThisBlogThis!Share to TwitterShare to FacebookShare to Pinterest
Labels: How-to, Nails, Trending