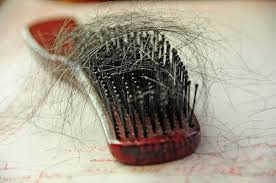 The best way to think of the way hair grows is to picture a garden. How well it grows is completely a result of what is happening “underground.”   Like a garden, a normal hair cycle should lead to hair growth. Growth cycles are important because when they go awry, that is one of the reasons we have hair loss.  Things that interfere with the growth cycle -- like medication, illness, infection, or chemicals -- have the potential to stop hair from being formed properly.  Hair grows in three different cycles: anagen, catagen, and telogen. About 90% of the hair on the head is in the anagen, or growth phase, which lasts anywhere from two to eight years. The catagen, or transition phase, typically lasts 2-3 weeks, during which the hair follicle shrinks. During the telogen cycle, which lasts around two to four months, the hair rests.  An overwhelming majority of the time the hair is on the scalp, it is growing. Only about 10% of the strands are in transition or resting at any one time. Hair grows about 6 inches a year for most people.

Most people lose anywhere from 50 to 100 strands of hair each day, according to the American Academy of Dermatology. On the days when hair is washed, people can lose up to 250 strands,  But don’t avoid washing in an attempt to keep the hair, as it will fall out eventually, anyway.  Typically, each time a normal hair follicle is shed, it is replaced by hair that is equal in size. But in women with female-pattern hair loss, the new hair is finer and thinner. The hair follicles are shrinking and eventually they quit growing altogether.

If you hair loss is sudden or extreme, a visit to your doctor should be your first step.  Preliminary blood work is usually taken to make sure the thyroid gland or an autoimmune disease isn’t the culprit.  The doctor may also ask what your mother, aunts, or grandmothers look like - if they have similar, or greater amounts, of hair loss. Using magnification on the scalp can show if a woman’s follicles vary in size - with some thick and others thin. These are two telltale signs of female pattern hair loss, also called androgenetic alopecia.  This is a hereditary condition that affects about 30 million American women, according to the America Academy of Dermatology, and is the most common kind of hair loss.

If you've addressed the medical concerns for hair loss, then there are products that can help you to re-grow hair or minimize the impact and look of thinning hair.  New innovations in hair and scalp care are being introduced and research is ongoing.