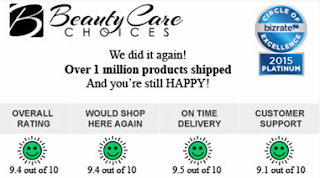 Yes, this is bragging, but to be one of only 84 on-line retailers in North America to receive the Platinum Award for Excellence, makes us very proud and we want to thank all of our customers for allowing us to serve you and we will continue to strive for excellence in all 7 categories!


THE PRESS RELEASE
Los Angeles (September 28,2015) Bizrate Insights one of the largest sources of consumer-generated reviews of online retailers in the United States, today announced the winners of the 16th annual Bizrate Circle of Excellent Awards.  The Awards recognize retailers that received outstanding online customer satisfaction scores in the past year as rated by millions of verified online buyers.

The 2015 Bizrate Circle of Excellence Award was earned by only 187 online retailers, representing the top 4.6% of retailers in Bizrate's North American Network.  Among the factors to determine winners is that satisfaction scores for the Award year must be significantly higher than the program average for all seven key satisfaction indicators.  Among the Award winners, 84 retailers received the highest distinction, the Platinum Award which is conferred on retailed that earned a score of at least 9.0 out of 10.0 in all seven key satisfactory indicators.

Posted by Beauty Care Choices at November 07, 2015
Email ThisBlogThis!Share to TwitterShare to FacebookShare to Pinterest