This pull-through pony fishtail updo is easy to do and looks oh so cool! The stretching you do as you style creates the "lived-in" look which also makes your braid appear thicker, with lots of texture.

Backcomb at the crown and spray all over with a texture spray like Rusk's Thick Body and Texture Amplifier or KMS Hair Splay Playable Texture. Then create a ponytail at the crown with a clear elastic.
Clip up the ponytail to move it out of the way and gather a second ponytail under the first. Make it in line with ears, about 1 1/2 inches under the first ponytail. 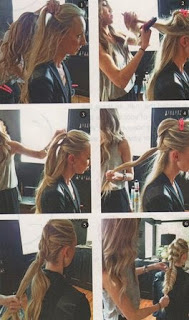 Let down the first ponytail and split into two sections. Pull the second ponytail up through the split in the first. Clip the second pony up, leaving the hair from the first ponytail down.
Use the hair that is down from the first pony and some hair from the sides, make another ponytail and secure.
Repeat the first four stemps until have have as many ponytails/bubbles as you like. Be sure to leave enough hair for the fishtail braid.
Fishtail braid the remaining hair and spray. While holding the braid at the end with a light tension, stretch the fishtail braid from bottom to top. Don't over do it. You can stretch more, but you can't do less once you've stretched.
Posted by Beauty Care Choices at April 16, 2015
Email ThisBlogThis!Share to TwitterShare to FacebookShare to Pinterest